Her father was a Marine and Vietnam Veteran whose family had served in uniform during every period of conflict in our nation’s history, dating back to before the Revolution. Later, her father worked with United Nations development programs throughout Southeast Asia, where he met Tammy’s mother, who would later become a U.S. citizen.

When Tammy’s father lost his job in his 50s and the family burned through their life savings, they survived with the help of food stamps and the generosity of others, but there were still months when the food stamps ran out early and the family didn’t have enough to eat. When she was 16, Tammy became the only family member with a job. By selling roses on the side of the road for 25 cents apiece and taking on other odd jobs, she helped pull her family out of poverty—and developed a deep-seated appreciation both for the social safety net that helped keep her family afloat and for just how hard so many Americans have to work to survive, pay their rent and put food on the table.

Duckworth finished high school and worked her way through college at the University of Hawai’i waitressing and with other minimum wage jobs before enrolling in a Masters in International Affairs program at the George Washington University. There, Tammy enlisted in the Reserve Officers’ Training Corps, where she quickly fell in love with the pure meritocracy of the Army—and met her now-husband, Bryan Bowslbey. After earning her master’s degree, Duckworth began a Ph.D. program at Northern Illinois University and continued serving in the Reserve Forces, interrupting her studies to become one of the first handful of women in the Army to fly combat missions during Operation Iraqi Freedom.

On November 12, 2004, Tammy’s UH‐60 Black Hawk helicopter was hit by a rocket propelled grenade that exploded in her lap. She lost both legs and partial use of her right arm in the explosion. As a result of her injuries, Tammy earned a Purple Heart.

After waking up wounded–but not defeated–more than a week later at Walter Reed Army Medical Center and fighting for her own life, she’s spent every day since fighting for those who sacrificed to save her—as well as for all military families. During her 13 months of painful recovery and rehabilitation, Duckworth quickly became a vocal advocate for her fellow Wounded Warriors.

After leaving Walter Reed, Tammy was named Director of the Illinois Department of Veterans’ Affairs, where she implemented many first-in-the-nation programs to alleviate suffering from post-traumatic stress, improve traumatic brain injury screening and reduce homelessness among Veterans. President Barack Obama later nominated Tammy to be U.S. Assistant Secretary of Veterans Affairs. There, she headed the federal VA’s effort to end Veteran homelessness, launched the VA’s first online communications efforts and was a leader in initiatives for female Veterans.

But Tammy also realized that many of the systemic and bureaucratic problems our nation’s Veterans and military families faced could only be fixed by changing federal laws. So she ran for the U.S. House of Representatives, served two terms—and retired from the Reserve Forces at the rank of Lieutenant Colonel after 23 years of service—before winning the Senate seat she now holds. In her first term in the Senate, Tammy was named the most effective freshman Democrat by the Center for Effective Lawmaking and one of the most effective of all Senate Democrats in the 116th Congress. Several of her proposals were signed into law by the President, including her first-ever Senate bill to help support jobs in Illinois and cut bureaucratic red tape on infrastructure projects, which became law in record time.

Senator Duckworth is focused on helping working families get ahead through job development programs, protecting Social Security and Medicare, promoting civil rights and equal rights for all Illinoisans, advocating for environmental justice and supporting our Veterans and military families. She serves on the Armed Services Committee; the Environment & Public Works Committee; the Commerce, Science, & Transportation Committee; and the Small Business & Entrepreneurship Committee.

In 2018, after Tammy became the first U.S. Senator to give birth while serving in office, she worked to change Senate rules to allow Senators to bring their infant children onto the Senate floor as they do their job voting on issues of national importance—sending a message that all workplaces should be family friendly. She has since passed several pieces of legislation making traveling easier for new moms and people with disabilities.

Tammy lives with her husband Bryan, their two daughters Abigail and Maile and her mother Lamai.

Tammy Duckworth is a retired member of the U.S. Army National Guard. Use of her military rank, job titles and photographs in uniform does not imply endorsement by the Department of the Army or the Department of Defense. 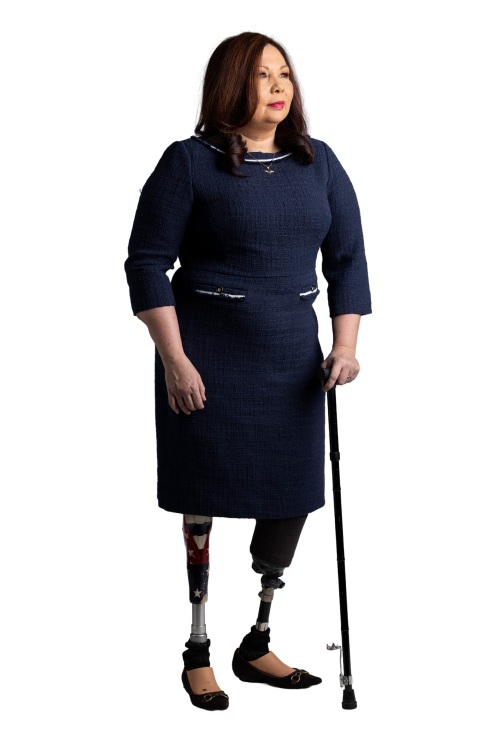 With your help, we will re-elect Tammy Duckworth and keep the Senate blue!

*If you’ve saved your payment information with ActBlue Express, your donation will go through immediately.

Help keep Tammy Duckworth -- a leader we can trust in moments of crisis -- in Washington working for all of us. Donate now.

*If you’ve saved your information with ActBlue Express, your donation will go through immediately.